Enhance Your On-camera Presence. Avoid these Pacifying Behaviors on Video 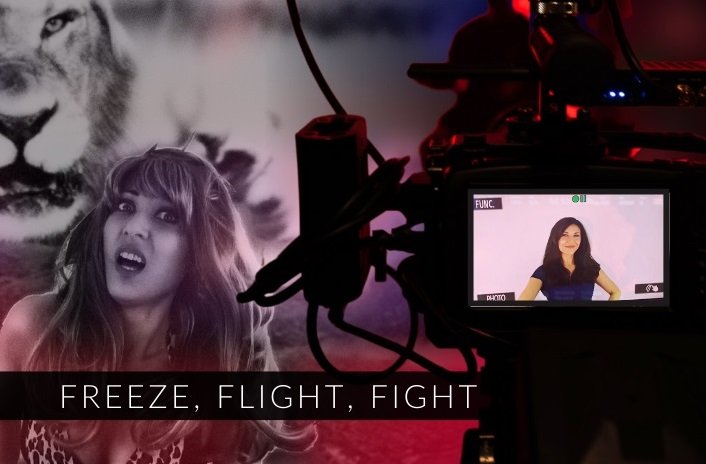 In a previous article, I explained that the way humans react to danger occurs in the following order: Freeze > Flight > Fight.

As documented in former FBI agent Joe Navarro’s book, “What every BODY is saying”, our human ancestors developed these threat responses to avoid being detected and eaten by large carnivores that preyed on us.

In our modern society, when people feel threatened, they still react in exactly the same manner our early human ancestors did. The threat response happens at a subconscious level, driven by the limbic system, the primitive part of our brains.

In our modern society, when people feel threatened, they still react in exactly the same manner
as our early human ancestors did

Presenting on video is obviously not as threatening as being confronted by a lion, but our brains still use subtle modifications of these primitive responses for lower-level threats.

In my work with clients, I see first-hand how people new to on-camera presenting exhibit some or all of the “Freeze > Flight > Fight” responses. These responses can be subtle, like a default low-level hum, below their level of conscious awareness.

Unfortunately, these threat responses become amplified on-screen and detract from the presenter’s ability to appear confident and persuasive.

The external behaviors we see in others act as signposts for what might be going on internally. A person’s thoughts and emotions are reflected in their:

A subtle manifestation of the desire to protect ourselves is “freezing”. It’s exhibited when people try to make themselves look smaller by taking up as little space as possible, often restricting their breathing and minimizing body movements in an attempt to avoid predatory detection.

Do you use any of these pacifying behaviors in your own video presentations?

In the context of video presentations, the visual effect of this threat response is like that of a “startled deer in the headlights”.

Some obvious freeze-fight-or-flight physiology states include:

As you can imagine, this is not the best way to give a powerful video presentation.

The freeze-fight-or-flight can also impact your energy levels on-screen. Some presenters try to compensate by over-projecting (actors refer to it as “hamming it up”). On-screen it comes across as pushed, forced, trying too hard, and inauthentic.

Others deal with the threat response by projecting very little social energy. They seem unsure of themselves and come across as “flat” or “wooden” in their delivery.

As an FBI investigator, Navarro writes that people being questioned about a crime will often keep very still, hold onto armrests, interlock their feet behind the chair legs, and “freeze” that position for an inordinate period of time while being interrogated.

Then from time to time, they will use their hands to touch, rub, or stroke themselves in an effort to reassure themselves. These “pacifying behaviors” are subtle manifestations of the threat response, and usually, happen at a subconscious level without the person realizing they are doing it.

Identify any of these pacifying behaviors in your own video presentations

Professional presenters and speakers have been trained to avoid such mannerisms so that they don’t undermine their message and authority. As a result, they appear more persuasive and in control. And the audience is more likely to be responsive to the presenter and their message.

Multiply your impact. Enhance Your On-camera Presence.
Get tailored on-camera techniques to maximize your delivery.
Book in for a 30-minute consultation today.
Or click here for my latest Service offerings.

Flight? Fight? Lean-to or Away?

The threat response also manifests itself in subtle ways. A person will subconsciously signal their desire to “flee” without even realizing that they are doing it. They will try to “distance” themselves from the threat (in this case the threat is the video camera), by leaning away or turning their feet toward the exit.

Or, they try to block the threat by placing objects in front of themselves i.e. cups, laptops, desks, etc. The feet are a dead giveaway. If you are hosting video interviews, watch where your interviewee’s feet are pointing, and it will give you a good idea of where they subconsciously would rather be.

The “fight” response is the brain’s last resort. When a person is confronted by a perceived threat, and they cannot avoid detection by freezing, and cannot save themselves by fleeing, the only alternative left is to fight. In our evolution as a species, we along with other mammals developed the strategy of turning our fear into rage. We scream, kick, and punch in an effort to ward off predators and make ourselves harder to kill.

A subtle manifestation of the “fight” response is to make ourselves appear more fierce with an aggressive posture, jaw jutting forward, chest puffed out, and arms and legs spread wide in an effort to appear bigger.

Aggressive communication can also be a manifestation of the “fight” response. Being argumentative, sarcastic, or using insults and put-downs, and leaning in to invade someone’s personal space is often used by people in an effort to make themselves feel superior. This type of masking behavior stems from a deep sense of insecurity and fear.

Pay attention to your own freeze, flight, or fight responses in your everyday life. Doing so will help you to develop a deeper understanding of your habitual avoidance strategies. The default mannerisms may go unnoticed by you but are visible on-screen.

Drop the storyline (your opinions about what  is happening), and practice my awareness technique:

The point of this exercise is to not beat yourself up or make yourself wrong. Doing so is a form of subtle self-aggression. Rather, it’s a practice in self-awareness, without having any form of judgment or opinion about it.

When you feel yourself being triggered and develop more awareness about your default behaviors and patterns, they begin to lose their hold and power.

If you have a question or you what me to cover a topic for you let me know. I’m always listening! And, you can always book a time with me to get the tailored support and guidance you need on any of the performance areas covered in this post. See below for details or learn more about my services here.

P.s Jump on my “Early Notify” Booklist. Packed with insider tips and techniques to help you deliver compelling, masterful videos for your business or personal brand.

Why YOU Suddenly Freeze up, Go Blank, or Close Down On Video
Speak Like an Anchor on Video. 6 Masterful Video Presenting Tips for your Business Videos